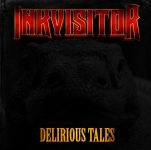 Retro-ish Speed and Thrash Metal has strongly been raising its messy head for quite some time ago. Bands are born as rapidly like hungry maggots in your beloved yet deceased grandmom’s rotting corpse – and there’s no end in sight to that at all, which on the other hand, is partly a good thing – and sometimes not so much really. Quality over quantity, right? Well, whatever… Finland’s young and crazy speed merchants INKVISITOR have only been around for a couple of years, and they have already proclaimed in public that they are into the 80s Metal, beer, booze and girls. How can you really go wrong with that kind of concept? Obviously you can’t – and at least INKVISITOR’s attempt on the band’s 5-track EP "Delirious Tales", to give a serious impression about themselves as an energetic, relentless, punishing enough and ready to thrash your socks off type of an act, seems to hit its target kinda nicely indeed. Relatively raw and unpolished Speed and Thrash Metal this definitely is – with a faint twist of some Crossover elements, yet reeking strongly of the 80s underground scene where these young lads seem to be at home surprisingly well with. INKVISITOR are nowhere as technical or intense sounding as their fellow country mates LOST SOCIETY or NUCLEAR OMNICIDE but there’s definitely more of this ‘let’s get thrashed and stoned’ value to their sound than those 2 aforementioned current Finnish Metal sensations. INKVISITOR’s motto is to have fun while playing their hybrid of Speed Metal, Thrash Metal and Crossover. Plus the band’s sort of ‘keep-it-simple’ flavored attitude playing wise, seems to do the needed trick. This stuff obviously doesn’t move any mountains yet but I for one am going to keep my eyes out for these young Thrash bangers in the future, that’s already certain. INKVISITOR’s other tales can be followed at: www.facebook.com/inkvisitorband