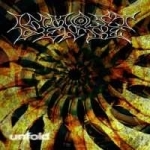 Magdeburg’s INMOST DENSE is another fine example of the healthiness of the current brutal Death Metal underground in Germany these days. Their self financed debut album “Unfold” is the band’s follow up to 2002’s promo CD “The Consequences Of Choice And Dissonance” (a demo entitled “Purified” was their first musical sign of life in early 2000) which already gained them quite a lot of (obviously justified) positive feedback. Even though they name bands, such as DEEDS OF FLESH, DISGORGE (US), DISGORGE (MEX), CEPHALIC CARNAGE, CRYPTOPSY, CINERARY, FLESHGRIND, VILE, BRODEQUIN and DYING FETUS as their main influences I would consider INMOST DENSE not as monotonous as several of those just mentioned. Ok, they have a really deep growling yet very convincing vocalist and often speed things up to the max, but generally their songwriting is pretty varied, which I appreciate a lot! There’s lots of cool breaks, clever arrangements and a heavy-as-fuck production, which all does a lot of justice to their material. So, if we should really need comparisons out of the aforementioned list, I would say that VILE And DEEDS OF FLESH are closest to what INMOST DENSE come up with. Musically all in all very promising, but visually these guys still have to improve a lot, as neither the choice of colors on their website (in ugly blue, urrgh…!) nor the strange looking packaging of this CD knows to impress in the same way and could easily turn a lot of people off (which would really be a shame). A band to keep an eye on! Make sure to check out one of their songs in our mp3 section! The disc sells for 12,-Euro (ppd.) at the following address: INMOST DENSE, c/o Carsten Fenske, Am Wasserturm 51, 39446 Löderburg, Germany, email: contact@inmostdense.de, www.inmostdense.de