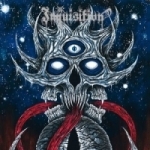 Originally Columbian, now US based Black Metal outfit INQUISITION has finally returned with a stunning new full-length after having us wait for fresh material three long years after 2007’s “Nefarious Dismal Orations”. Cumbersomely entitled “Ominous Doctrines Of The Perpetual Mystical Macrocosm”, fans of the band will immediately be caught on the hook by their trademark sound uniting mid 90s storming Black Metal with their unique sense for vicious groove and merciless impact. Switching from brutal blasting speed to rolling heavy mid-tempo riffs at times flavoured by some samples (again from Naschy’s “Inquisicion”), folk-like acoustic guitar interludes – which also could be found on the band’s fabulous debut “Into The Infernal Regions Of The Ancient Cult” – INQUISITION might not be offering surprises but again deliver the goods with such a maximum in effectiveness and dedication making the opus as irresistible as ever. Due to their longevity and meanwhile pretty constant live activities in Europe, INQUISITION have deservedly expanded their reputation as an underground Black Metal legend and “Ominous Doctrines Of The Perpetual Mystical Macrocosm” is a perfect new drug for all followers of the ancient cult! Production-wise the effort turns out more crisp and clearer than their previous works which might irritate total die-hards at first, but ultimately songs like the driving opener ‘Astral Path To Supreme Majesties’, the slow epic ‘Desolate Funeral Chant’, the catchy ‘Upon The Fire Winged Demon’ and the crushing ‘Crepuscular Battle Hymn’ leave no room for complaints. Though some might sneer at the band’s increasing parallels to old IMMORTAL – especially due to frontman Dagon’s similar evil snarl – the duo remains unrivalled in its ritualistic, occult complexity and conviction and “Ominous Doctrines Of The Perpetual Mystical Macrocosm” a must-buy for all Black Metal maniacs out there. www.myspace.com/inquisitionusa, www.no-colours-records.de, www.hellsheadbangers.com