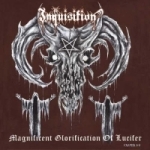 The US Black Metal horde’s third album is – as one could already guess from the advance tracks on the “Unholy Inquisition Rites” MCD – another masterpiece, uniting ritualistic blasphemous atmosphere with crushing heaviness! Fast aggressive parts, dark and pretty infectious melodies and Dagon’s typical sinister vocals melt together into an absolutely unique interpretation of Black Metal that might polarize, but nonetheless deserves to be called exceptional in today’s extreme Metal scene. Fans of the duo will definitely not be disappointed by the mighty yet raw sound and (un)godly hymns like ‘Crush The Prophet’, ‘Impaled’, the title track or ‘Eternal Loyalty’. Keeping the songs compact, the riffs ingeniously primitive grooving and the drumming more powerful and effective than ever before turns “Magnificent Glorification Of Lucifer” into a dark satanic maelstrom consuming everything in its path… I personally consider INQUISITION’s newest strike a little more addictive and variable than its predecessor and can only heartedly recommend it to both people already worshipping the band and those “uninitiated” to the cult of INQUISITION. I’d dare saying “must-have”! Outstanding, charismatic album to which does not exist any alternative. Short sound clip can be found at www.no-colours-records.de