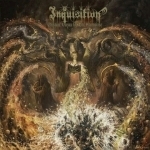 INQUISITION
Obscure Verses For The Multiverse
(Season Of Mist)
52:26min

There is nothing new on this album. We all could hear it before. Yes. But seriously, who cares, if the album is fuckin’ awesome!? INQUISITION slowly (this is their sixth album, plus they did bunch of EP releases), step by step, estabilish their position on the Black Metal scene, and with no doubt "Obscure Verses For The Multiverse" is a step into right direction. The Colombian / American band (they started in Colombia but now they are located in Seattle) started as a Thrash Metal act, so probabaly these Classic Metal roots are one of the reasons why the guys are able to write really interesting tunes. You know, sometimes when we will strip down some band from their image and we will leave the music alone, there is nothing left on the table. But not in case of INQUISITION, as they deliver really good riffs, really good songs, and isn’t it what we are actually looking for, especially when it’s served ice-cold? It is, and we find them on this album. Correct, sometimes they are very, very similar to IMMORTAL – but come on, nothing wrong with that, especially when we will realize that no one knows when Abbath and his group of merry men will release a new album. And yes, some of these moody passages sound like taken from a DISSECTION album, so let’s analize the facts: comparisions to IMMORTAL and DISSECTION? Check. Good production, without irritating modern clicking drums? Yes, check. Corpsepaint? Check. Pure fuckin’ Metal spirit all over? Check. Of course you need to listen to it yourself and decide, but there is a huge, huge chance that if you like good sounding, high quality Black Metal based on good riffs, without unnecessary extremism, then you will become an INQUISITION fan. Of course in case you aren’t one already, and you already have this album on the top of your shopping list. In such case, you won’t be dissapointed, as INQUISITION continue what has been started on "Ominous Doctrines Of The Perpetual Mystical Macrocosm", in a truly glorious way. The album will be available as CD, limited edition CD box, and in several double vinyl versions. www.facebook.com/inquisition.official, www.season-of-mist.com