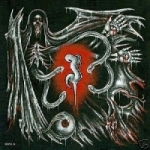 Admittedly, I still think that INQUISITION is live better than on disc, but once again the duo has unleashed a superb three-quarter of an hour of ancient Black Metal. Blastbeats mixed with very melodious doomy, sometimes even groovy parts and above all the very distinct voice of Dagon, mastermind of this US/Colombian band. The complete album has a very traditional and occult aura without being actually comparable to neither the early Norwegian sound (with a few hints of IMMORTAL as an exception to the rule) nor nowadays orthodox Black Metal, and I am pretty sure that most of the band’s fans will grip this immediately. And it should be listened to what it is – a complete album because that is the only way how it can really be digested. The album comes in four versions, which I find a bit odd, but then everyone might be pleased that way. A Sample of ‘Infernal Evocation Of Torment’ can be found here: www.no-colours-records.de, http://pwp.netcabo.pt/0247963001/icon2/news.htm