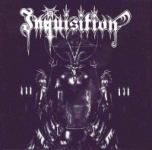 In any case, this band from the USA is pure cult! How long have I waited for this one? After their grandiose “Into The Infernal Regions Of The Ancient Cult” album the new masterpiece is finally available. Ancient Black Metal hymns (no band sounds like them!), impressive yet straight drum work and guitar riffs and the fantastic voice of mastermind Dagon which isn’t comparable to any other shouter in the entire underground scene! Indeed the sound and the feeling of this cult can not be described in human words nor letters. Ultra-fast blast parts change into great melody-bows, the sound is again perfect and the visual aura of the album could not be done better! This band in its feeling is unobtainable. For the first time a band made true what its album title promises. I am speechless… Watch out for the LP version out on Iron Pegasus Records!