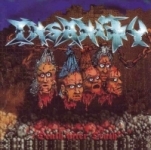 I was kinda surprised when I heard a while ago from guitarist / vocalist / INSANITY mainman that their debut album, which originally was issued on M.B.R. Records from Germany in 1993 (which was nothing else than a rip off deal), would be redone with new vocal parts (courtesy of Mr Dave Gorsuch) and would be remixed, and here’s the result issued on Dave’s own label. For those who’re not familiar yet with what I always considered as one of the best Thrash / Death Metal bands in the world, INSANITY comes from the Bay Area and have been in existence since 1985. They provided us with some of the best technical / intense Metal ever through many cult demos / rehearsal / live tapes, but following some dramatic events, they never managed to got signed by any labels that could have gave them the real career they deserved, making INSANITY one of the most unluckiest but talented bands in this poor world. They finally ended up on M.B.R Records to do an album which was never properly distributed and promoted at all. If you like your Thrash / Death Metal like it was in the mid Eighties, then this album is a gem! Incredible technical riffing mixed with excellent arrangements makes songs such as ‘Attack Of Archangels’ (still sounds unreal 15 years later!!), ‘Death After Death’, ‘Possession’, ‘Morbid Lust’, ‘Rotting Decay’ some of the best Metal ever along with the POSSESSED and MORBID ANGEL albums! It’s that good!!! The new vocal parts sound alot more deathly, but still have nothing to do with the Death Metal crappy doggy vocals we had to hear since the early ’90s, as they’re more in the old POSSESSED, MASTER vein (excellent job Dave!). The only thing that I still think was better in the early demo days were the drum parts courtesy of Mr Bud Mills which were superior to the job Prakash Sharma did on this album. But this is minor criticism as the whole thing sounds GREAT!!!! I wish people would wake up and finally give some attention to that incredible pure Death / Thrash band from California who NEVER GAVE UP despite all the shit they have been confronted with during 15 years!!! Contact: insanity@blacklungproductions.com