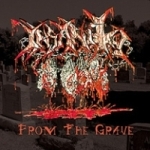 No, unfortunately this ain’t a new album by San Francisco’s legendary Death / Thrashers INSANITY, but nevertheless a fine collection of their classic material. “From The Grave” features 15 songs that for some reason never really reached the same popularity as material of other bands from that era (DEATH, POSSESSED, DARK ANGEL, SACRIFICE, REPULSION etc.), even though these guys definitely could compete with any of ’em! Musically their material could be described as a cool mixture of classic POSSESSED / SLAYER with the lightning speed furiousity of early SADUS! In that repect you gotta listen to tracks like Attack Of Archangels’ or ‘Blood For Blood’! Absolutely amazing stuff! So, what do we have on offer here? The disc kicks off with a remastered version of the band’s classic 3-song rehearsal demo from 1985 (tracklist: ‘Fire Death Fate’, ‘Ultimate Death’ and ‘Blood For Blood’), which is a kinda unusual thing these days considering the fact that the soundquality is worse than on any of the other recordings. So, in this case the CD was obviously put together in chronological order, which is fine with me. Next up is the entire “Death After Death” album from 1994, which originally came out on the small German label M.B.R. Records. I suppose signing with them was probably the band’s worst decision career-wise as distribution and promotion was almost non existing. A sad thing, really, cause “Death After Death” is definitely one of the best and most raging death/thrashing releases ever! If these guys would have been picked up by one of the leading companies at the time (Metal Blade, Combat, MFN etc.) INSANITY would most certainly be mentioned alongside all the other genre leaders nowadays! Anyway, at least the entire album gets a new chance now (properly distributed by Relapse). The original recordings got changed a little bit for this (new vocals and additional guitar work was added in 1997) and the running order of the songs differ from the original release as well, so this is basically the same version that already was released via Black Lung on CD-R format back in 2000. I’m not really a fan of touching classic recordings, but this one turned out pretty cool nevertheless. “From The Grave” gets completed by a remastered 8-track demo that originally was recorded between 1993 and 1998 and finally finished in 2005 (tracklist: ‘Carnivore’, ‘Night Of The Dead’, ‘Ritual’, ‘Extinction’ and ‘Ultimate Death’). Some recording info, a couple of pics and liner notes by NAPALM DEATH’s Barney and EXHUMED’s Matt complete the overall very convincing picture. So, if you missed out on the M.B.R. version, make sure to get this now! For all further info on the band head to www.blacklungproductions.com/insanity