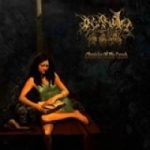 Do I really still have to introduce California’s INSANITY to the VOICES readers? Oh well… These guys started out back in the mid 80s and quickly established themselves as a highly intense, deathly Thrash Metal force. Musically they could almost be labeled as a highspeed version of early POSSESSED yet with an even more aggressive overall approach in their delivery. Unfortunately their original guitarist / singer Joe De Zuniga died of a heart disease in 1987 and none of the bigger, more established labels at the time picked them up, so that they weren’t really able to catch up on the attention that like-minded bands such as DARK ANGEL, POSSESSED, EXODUS or SLAYER were already getting. As a result it took them no less than nine long years to finally get their debut full length "Death After Death" released through the small German underground label MBR Records. Even though the album is totally killer from start to finnish, it unfortunately only gained them cult status… Probably first and foremost because of its poor distribution, but also because of the fact that this type of music was already considered dated by a lot of the younger kids who worshipped the more brutal Death and grim Black Metal instead that had flooded the scene in the meantime. But all this luckily couldn’t stop INSANITY, so that they are still going strong these days, with guitarist Dave Gorsuch as the leading force behind them (he also took over the vocals after Joe’s death). So, apart from the original "Death After Death" album there’s already a couple more INSANITY releases out in the meantime, but none of them was done with so much dedication as "Chronicles Of The Cursed", which just came out on China’s AreaDeath Productions. The entire release is strictly limited to 1000 copies and was manufactured in a very deluxe way, almost like a real hardcover book, with an additional high glossy jacket, while the two included CDs were visually designed like vinyl records (you’ll even recognize a "Side A" and "Side B" on them, which is a damn cool idea). So yeah, it all looks incredibly great! The book(let)’s actual pages begin with a title- and content-page followed by liner notes from EXHUMED’s Matt Harvey and NAPALM DEATH’s Barney, an in-depth interview with INSANITY guitarist / vocalist Dave Gorsuch, all the lyrics and a lot of cool pics… If you’re furthermore able to understand the Chinese language, you’ll be pleased to hear that all of the stuff in there got translated into Chinese as well. There’s also a very limited (!!) "Chronicles Of The Cursed" die hard edition available (200 copies) that comes in a great looking box and additionally includes an INSANITY patch, a longsleeve-shirt and a button! My only little complain regarding the packaging is the fact that there’s no real tracklist and recording details in the english written part… Maybe that was simply forgotten (as it is in the Chinese part)?! Who knows… Anyway, that ain’t really a big deal, so let’s have a look at the material instead that is on both of the CDs. About 50% of it was already featured on the "From The Grave" compilation CD that came out via Parasitic Twin Productions in 2005… I’m talking about the entire "Death After Death" album (except for ‘In Memory’, the little Joe De Zuniga musical tribute piece), 4 remastered 8-track recordings (unfortunately ‘Ultimate Death’ from that same session is missing here), as well as the 3 songs from the band’s classic ’85 demo. But don’t worry too much about that if you should already own that compilation as there’s no less than 22 additional tracks on this double CD that should easily please every INSANITY maniac to the max! I won’t go too much into details here, which songs exactly you’re gonna get, just let me tell you that there’s a couple of live songs from Berkeley (’86) and San Jose (’94), a 1989 demo (4 songs), the first recording of the 1985 demo plus a bunch of early and late 1986 rehearsal songs. The sound quality differs from good to average, but that should be obvious anyway as we’re mostly dealing with live-, rehearsal- and demo-recordings here. As the original "Death After Death" CD is out of print for a long time already, this is a good opportunity to finally add that album with tons of additional material to your collection! Essential! More info at: adp.areadeath.net/en, www.myspace.com/insanity, www.blacklungproductions.com/insanity