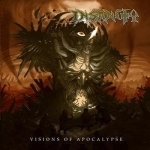 For those of you who don’t know INSANITY (shame on you), they are a pioneering Death / Thrash outfit from San Francisco, California. Starting back in 1985 and after a bunch of demos and rehearsals that built a cult following at the time, their debut album was released in 1994 by M.B.R. Records. Sadly, a bunch of issues, including the passing away of co-founder Joe DeZuniga in 1987 and original drummer Bud Mills in 2007, their label closing down plus constant line-up changes made the band go on hiatus for 6-7 years. After their comeback in 2001, their sophomore effort was due long ago. And finally it is here. "Visions Of Apocalypse" brings on exactly what was expected from the band. A crushing slab of unadulterated Death / Thrash Metal the way it was meant to be. Built around only original member Dave Gorsuch (guitars and vocals), the new line-up delivers the goods in every single way! The technical proficiency of each member never overshadows the intensity of the songs. Starting with a dense and heavy Death Metal base mixed with intricate leads and hyper fast Thrash Metal all infused with a vicious and relentless pace, make this album a must in every respectable and self proclaimed Death and Thrash Metal fan. Production wise, the album sounds as it should: heavy and dense, yet balanced. A clear mix that allows every instrument to come through, great vocal presence and a good mastering that is full of dynamics, showcasing every aspect of their style. I could think of some exact words to describe "Visions Of Apocalypse", even though they are all cliché and have been used ad nauseam. But even those words cannot describe the brutality and aggression that INSANITY has packed in this new album. It is, definitely, a worthy successor of their 1994 opus "Death After Death". Basically, I cannot recommend this more than I had already. An album that should be noted as a new standard in the genre. Yes, it is THAT good! Go show some well deserved support to the band here: www.facebook.com/pages/insanity/57208433713, www.insanity-metal.com. And get their album here: www.unspeakableaxerecords.com