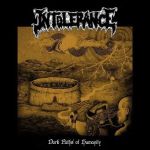 INTOLERANCE are hailing from Zaragoza in Spain and after a demo release and an EP, they finally unleash their first full-length “Dark Paths Of Humanity” via Memento Mori. Among the dozens of releases every month, often good releases perish and don’t receive the deserved attention. “Dark Paths Of Humanity” is a debut, which really deserves some proper attention. The opener ‘Embodiment Of Chaos’ offers solid mid-tempo old school Death Metal with some uptempo parts. The songwriting is pretty solid and I hear some BOLT THROWER appearing in their sound, but this is only meant as a hint as INTOLERANCE in total are a bit faster. But the songwriting, instrumentation and also the vocal work is as solid as known from a lot of better known influences. ‘Death Before Slavery’ continues the way, but convinces even more with its interesting lead guitar parts and thick atmosphere once they slow down the pace a little bit. ‘Beyond The Axis Of Truth’ is faster again, but with similar instrumentation and really enjoyable grunts while the leads again are really nailing it. Highlighting special tracks would lead into discussing the abum track by track as INTOLERANCE managed to write an album without flaws and with a lot of love for details, matured songwriting and atmosphere honoring the old school Metal of Death. Rounded off by a nice cover artwork, fans of old school Death Metal, which don’t expect their style to get reinvented again, can do nothing wrong by checking these promising newcomers out. I am really curious to hear some more stuff in the future and will enjoy “Dark Paths Of Humanity” until then. For more info, check one of the following sources: www.facebook.com/intolerancedeathmetal, www.facebook.com/memento.mori.label