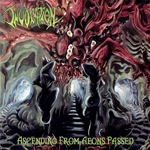 Another really nice surprise for me is the first album of underground hopefuls INVOKATION from south-western Germany. The material for “Ascending From Aeons Passed” was already recorded in late 2013 but due to problems with their now defunct former label, the album finally will be released via CCP Records from Austria in Autumn 2015. Formed in 2007, the band released a demo in 2009 and started to work on their first album in early 2013. This long time really helped them to grow as the material sounds really matured. Their sound is influenced by US styled Death Metal and offers the typical trademarks like grunts, sometimes varying between grunts and screams, typical blastbeat attacks, technical and precise drumming and shredding guitars. At first sight, the guitars sound typical, but while listening to the material more often, the lead guitar and its melodies also seems to be influenced by Scandinavian Death Metal, as the lead melodies are partly very melodic and warm and less distorted compared to their American colleagues. Sometimes it even gets a bit grindy, but always unique and never like a copy of their influences. Especially ‘Phoboscope’ is a real killer track and its melody goes straight into your mind and stays there. Apart from their good sound, the band renounces to use gore lyrics and has focused on topics like anxiety and its effects on human beings. The solid production is clear and fits good to their material. I am sure that we will hear more from these hopefuls in the future and look forward to the successor of this fine debut, hopefully to be released sometime next year. Readers of our zine must check the band out via one of following three sources: www.invokation-death.de, www.facebook.com/invokation, www.ccprecords.com