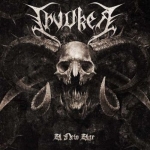 The first release of German INVOKER saw the light of day already a year ago. But that’s no reason not to present it here, because “A New Age” is too good to remain in the deepest underground. At first look, a mix of Black and Death Metal seems to be rather unspectacular. Yet, the more I listened to “A New Age”, the more it became pretty spectacular. It’s the immensely fluent songwriting and the clever, but never overloaded arrangement that makes this album a very fine surprise. From the opening riff of ‘Act Of Killing’ to ‘Despair’ and ‘Until The Grave’, INVOKER convince with blackened riffing and harmonies that would fit DISSECTION and IMMORTAL perfectly. Add a Death Metal feeling and you get a great opening triple that makes you want more. And of course you’ll get more. ‘Armageddon Rises’ probably is both the blackest and straightest track. Now be ready for some surprises with ‘Dwelling In Darkness’. This one starts off with cool guitar harmonies in the opening segment, that remind me of some melodic Punk bands, and as well offers some unexpected opera styled choirs in the middle part. In ‘Ekpyrosis’ there are even some reminiscences to the controversial German band EISREGEN, maybe due to the fact that this is the only song sung in German. At least the similarities of the vocals of T.B. and Blutkehle Roth from EISREGEN are audible best in ‘Ekpyrosis’. This is not the only reason why this one is my fave on “A New Age”, it’s also the guitars here, that are pretty much inspired by classic Metal. The again pretty black ‘Woods Of Nothingness’ and the outro ‘Bloodstained Route’ end up an absolutely convincing debut that makes me wait for more. Until then, I’ll listen to “A New Age” again. Everyone into classy extreme Metal should go to: www.facebook.com/invokerofficial or check the label: www.facebook.com/godeaterrec