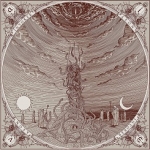 Two years ago, the German four piece INVOKER released their first assault “A New Age”. This album nearly came out of the nothing back then and blew me away, due to the fluent and catchy mix of Black and Death Metal INVOKER presented on that album. Now the Saxons are back with their second album “Aeon”. It was good to hear on the first listening that they kept the path they took. Those never overloaded and handy arrangements still are the cornerstones INVOKER stand for. Combined with their Black Metallic feeling for riffs and harmonies and the Death Metal undertones, the musical direction of the band stands solid as a rock. It’s the subtle changes that make this album. The stress on the album is put on more blackness and more harmonies, at the expense of the variability that made “A New Age”. Before you get me wrong – “Aeon” still is a damn good album, it just can’t completely keep up with the debut album. And songs like the title track, ‘Lawless Hunter’ or ‘In The Womb Of Arrogance’ are far too good to be ignored. Instead, they seduce the listener to listen to them again. And with the melodic ‘Engulfed For Millions Of Years’ and the final, nearly epic ‘Woods Of Nothingness’, INVOKER save two real highlights for the end of the album, keeping the arc of suspense on a high level. To sum it up: “Aeon” again shows that INVOKER are one of the hopefuls of not only the German Black Death scene and those who loved the first album won’t do anything wrong in checking out the second one. Do so at www.facebook.com/invokerofficial or www.non-serviam-records.com