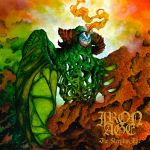 Before Jason Tarpey was singing in the traditional Metal behemoth called ETERNAL CHAMPION, he was the throat and lungs of a Metal / Hardcore band called IRON AGE. This is in fact their second album, originally released in 2009 and now reissued, and when I first heard it, having read the band was a Crossover act, I was rather surprised… nothing within Metal could be much further from the D.R.I. sound I might be anticipating. Going back to their 2006 debut, you can notice a much more obvious closeness to bands like CRO-MAGS, but three years later the band had become far more doomy with a lot of Heavy Metal in their guitar playing. For fans of ETERNAL CHAMPION it may be a little shocking to hit play and hear Tarpey singing in this raspy, straightforward way, akin to American Hardcore. Still, as the album progresses he cannot help himself but to actually sing every once in a while, even in this register. Still, some building blocks of these songs sound a little alien to my old Metalhead ears, and I suppose it must be due to the reported Sludge influences (a style I never felt interest in getting acquainted with). Anyway, the result is quite remarkable, namely an immensely heavy album with diverse pacing changes, great riffs, awesome guitars and thundering drums. The skillful compositions are impressive and profit from this unusual concoction of BLACK SABBATH with Hardcore (the latter discernible mainly in the vocals), including much of the Heavy Metal riffing ETERNAL CHAMPION master. An album which is heavy as a load of iron ingots for Jason Tarpey’s forge. Check this at https://ironagetx.bandcamp.com, www.20buckspin.com