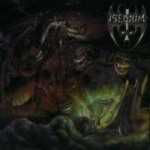 What a blast! Following their self titled mini CD on Last Episode, Germany’s Black Metal force ISEGRIM got picked up by Massacre Records to continue their never-ending war against everything that is holy. And with "Dominus Infernus Ushanas", their first full length, they already managed to produce a hell of an album, that is so full of aggression and true to the bone, that it could easily put the band on Germany’s empty and already quite dusty Black Metal throne (did I just really hear the name MYSTIC CIRCLE?? You’re kidding, aren’t you??!). The powerfully produced (yet very harsh and ice-cold sounding) 7 track assault is a well done furious inferno of sheer brutality and almost as intense as old EMPEROR, MARDUK or DARK FUNERAL releases. This is certainly no wimpy shit (there’s no keyboards on the whole record!), no nice Gothic type pseudo Black Metal, but right into your face and totally devastating material all the way through, from the album’s short intro ‘Domine Ushanas’ up till the very last tone of ‘Into The War Of Satan’. Typical shrieky vocals combined with deep demonic growls, incorporated in very well composed and professionally executed songwriting will easily satisfy the needs of every raw Black Metal worshipper. Really promising!!!