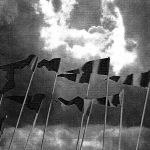 O (TURIA, LUBBERT DAS, SOLAR TEMPLE) and M (FLUISTERAARS, SOLAR TEMPLE) returned with their third full-length “Vergezicht”. The Dutch Black Metal scene has always been a source of enthralling newcomers and ISKANDR can be named as another good addition. The label termed them as “Obscure Heathen Black Metal”, but ISKANDR not really presents that. BATHORY can be said their direct stylistic influence, also PRIMORDIAL and URFAUST. Some folky and progressive elements come to that foray, but ISKANDR hides a lot in the details and calls for close inspection. Like their early records manifest, all songs are long in the new record, but not lengthy and the word “epic” is lot better expression. Six songs are delivered here, which lengthened more than one hour. However, ISKANDAR have that song-crafting skill not to drown in the trap of being atmospheric for the sake of atmosphere. As in the beginning with ‘Gezag’, you will be magically drawn into the spell for two minutes before the piece turns into atmospheric Black Metal. Also in ‘Bloeddraad’, ‘Het Slot’ and ‘Baken’, ISKANDR manage to sound deeply dark, despite having that folksy and progressive gentle atmosphere. Genre typical blast beats come often, though M shows his craftworks in folksy and progressive arrangements. Whispering vocals of O makes that altogether more provoking. No wonder O, who is the elusive mastermind behind ISKANDR, is surely sedated by the aura of “Twilight Of The Gods” and exerts that throughout the record with his multi-instrumental expeditions. With all these, in “Vergezicht” they present an album that sounds like a total piece and can entice from the first note on to repeated listen. The crystal sounding production suits their style and ISKANDR now can be said developed their own sound, after two rather typical atmospheric Black Metal albums. Explore more the band and label here: https://iskandr.bandcamp.com, www.facebook.com/eisenwaldofficial