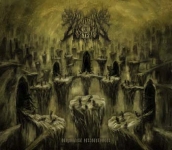 With Истина (transcribed ISTINA), we have a Russian two-man band from Krasnoyarsk in deepest Siberia. The band’s name translates as “Truth”, thus I am obliged to tell nothing but the truth about them – not that I never tell you the truth anyway… “Откровение неизвестности”, translated: “Revelation Of Unknown”, is their second, again self produced album after “Познание тьмой“ four years ago. Musically, Истина are deeply rooted in Black Metal, playing it in a depressive to even suicidal style. Their roots are not only displayed in the musical direction of “Откровение неизвестности”, but also in the extremely raw and basic production, that most of the times is so abysmal, it is hard to listen to, maybe unless you’re an ultra of trveness. In my opinion, the lousy sound spoils the often very interesting approaches of Истина. The basic ideas of the pretty crazy ‘На пике сумасшествия’ (‘At The Peak Of Madness’) or the very dark ‘Иной’ (‘Alien One’) are quite exciting and it for sure would be fantastic to listen to them with a better and clearer sound. The title track ‘Откровение неизвестности’ sticks out with its atmospheric dark parts and ‘Потеря контроля’ is a musical realisation of the song’s title that translates as “Losing Control”. And imagining the long, atmospherically composed dark ‘Возвращение’ (‘The Return’) with a proper production and a real drummer instead of a bad machine nearly brings tears to my eyes. But having the scrapyard production it has, “Откровение неизвестности” is nothing but a missed out chance. So, for the next album, Истина should look for a good producer, and they might record an album that really will be my cup of tea. But in case that this production was absolutely intended by the band, it would be better if someone else will do a review on Истина. Until then, check www.facebook.com/istinabm or https://istina-bm.bandcamp.com