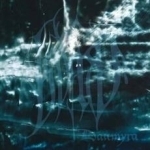 ISVIND has returned with their next full length offering of old school 90s era Black Metal. I have to admit that I look forward to releases from this band and it came as a surprise to me when I came across "Daumyra". These guys seem to have found that spark that they had back in the 90s and are coming back with a purpose. If you read my review of the previous release "Intet Lever", then you will know what I am talking about. This album is yet another nostalgic trip down memory lane, and one that was needed considering all the crap that is being released these days that is pawned off as Black Metal. "Daumyra" is a return to the olden ways and provides what you would expect from an era long gone: production is fair (not polished), grim vocals, and songs that capture the imagination. There aren’t any fancy keyboards, a great mixed production, or symphonic sounding extras needed to bring the message across. This is the raw material that grasped the attention of many in the early / mid 90s, and would sit well with early DARKTHRONE, EMPEROR, or IMMORTAL. Yes this is a refresher course and a good one at that. The gloominess of opening track ‘Kast Loss, Brenn Alt’ sets the mood for what you can expect on the rest of the music. Eerie but at the same time majestic, the music creeps up and then BAM grabs your attention. ‘Burn The Kings’ was one of my favorite tracks on this album. The music sounds like it was one of the outtakes from DARKTHRONE’s "Transylvanian Hunger" by providing the fast paced-tremolo-picking ISVIND really knows how to capture the atmosphere. ‘Blodstorm’ and ‘The Dark Traverse’ really accentuate the album and have a bit of a Black’n’Roll vibe that breaks up the monotony. ‘Myra’ was a bit too slow for my taste and tended to drag out, but hey not every song will be a masterpiece. ‘Speculum’ is the apex of the material found on this album and really brings out the diversity that ISVIND brings to the table. The pace of the song jumps back and forth from a mid tempo piece to a thrashy fast paced beat. I really had fun listening to ISVIND’s newest slab of Metal. If you’re a fan or familiar with their debut "Dark Waters Stir" then you know what to expect from these guys. However, I hold "Dark…" with a high regard and it still sets the bar of what this duo releases. If you are looking for "Dark…" part 2 then you might be disappointed, but with that said I think this is a good contender. For more info: www.facebook.com/Isvindband, www.isvind.net, www.folter666.de