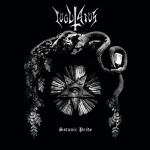 Always, wherever there is light, also darkness can be found, somewhere. In Poland, the dark forces have been suppressed by the catholic church and their immense power for a long time, but some dark forces started to break these boundaries in the early 90s and smoothed the way for a second generation of dark Metal whorshippers. One of these talented bands were IUGULATUS from Lodz, who worshipped the blackend Metal of Death, once initiated by bands like DISSECTION, NECROPHOBIC and MARDUK. The material of this second full length was recorded already back in 2010 and released in 2012 via the fine label The End Of Time Records. These five hymns of blackened Death Metal with a total length of 42 minutes sound so Scandinavian, that I was surprised to learn, that these guys are coming from my homeland Poland. Of course this style is nothing new at all and still a lot of bands try to reach the quality of the mighty immortal DISSECTION. Of course, also IUGULATUS are not reaching this level, but the material is of upper quality anyway. They offer solid songwriting, the typical voice, you expect, varying between Death and Black Metal, solid guitar work, influenced by Death, Black and Thrash Metal and a lot of blood freezing melodies included in the songs in the way, the old No Fashion bands used to play this style. After several spins, I still am not disappointed or bored so for fans of this style, "Satanic Pride" is recommended. Unfortunately the band has somehow disbanded and some members continued with a similar style under the new monicker ARCHITECTS OF DISEASE and released their first album "Open The Hearts" also via The End Of Time Records. More info about IUGULATUS can be found at: www.facebook.com/pages/iugulatus/172966546085152, label contact: theendoftimerecords@gmail.com