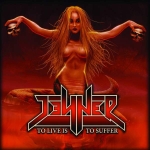 JENNER
To Live Is To Suffer
(Infernö Records)
37:18min

"To Live Is To Suffer" is the debut full-length for the all-female Serbian Thrash Metal band JENNER, opportunity given by Infernö Records that saw some good potential in the two-songs "Demo 2015". "To Live Is To Suffer" is actually a solid old school Thrash / Speed Metal album, without any modern contamination. These girls didn’t show only an 80s outfit on their pictures, their sound is also rooted in classic Heavy Metal and decisively influenced by early EXODUS, early MEGADETH, HEATHEN, AGENT STEEL, ZNOWHITE, SENTINEL BEAST and the likes. The excellent riffing of the guitarist Aleksandra is surely the extra oomph of this quartet, it’s dynamic, powerful and tight, with a good use of harmonics. Her solos are enough efficacious, never too technical but purely melodic and they integrate well in the general vibe of the songs. Anđelina’s vocals are ok, the beats are not really brillant and she seems a bit unnatural in the very high range, but her dedication is significant and there’s a thrilling chorus on every song, she doesn’t make a fool if compared to legends like Sabina Classen, Debbie Gunn, Nicole Lee or Dawn Crosby. The rhythm section is rather well capable but it maybe doesn’t strike for personality. There are some good Mina’s bass lines and Marija’s drumming is solid and never sloppy, but I can’t hide a negative critic for the inappropriate skank beat (the main Thrash Metal beat) without sixteenths with the right hand. It’s a common fault that many drummers do and I can only suggest to work out Dave Lombarbo’s method with no fear for tendinitis. The cover artwork by ´eljko Manojlović well discloses the aggressive female-power soul of JENNER, that deliver us their business card and join a more and more good Serbian scene. "To Live Is To Suffer" is surely a positive debut album and they have huge room of improvement. I think that old school Thrashers can enjoy their attitude on this first work, so check out www.facebook.com/jennerserbia and www.inferno-records.net for all the information you need.