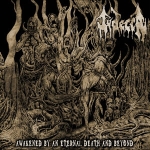 JUDECCA
Awakened By An Eternal Death And Beyond
(Dan's Crypt Records)
66:45min

FINALLY!!!!!! Spanish label Dan’s Crypt Records has just earned a free beer from this reviewer right here. The label has released 99% (well except for the split with HORROR OF HORRORS, but that was only one track) of the mighty JUDECCA’s catalog all on one cd. These Floridians were on the now defunct but legendary label Wild Rags and were a band that really brought a nice new shot of adrenaline to the 90s Death Metal scene at a time when things started to get stagnant. I remember reading about these guys back when my buddy had his own zine back in 1994, naturally my curiosity peaked and that same buddy sent me a compilation cassette that had a track by JUDECCA. I was hooked from then on. The band has a sound of early 90s era DEATH music combined with the vocal style of Craig Pillard era INCANTATION. The CD starts out with the band’s second set of 6 tracks off of the "Scenes Of An Obscure Death" demo, the production is a little rough but not bad over all as you can still manage to hear the instruments. The vocals and guitars take center stage over all and the bass is practically non-existent. A solid demo with some catchy songs, ‘Evil Born’ and ‘Necrosis’ are the stands outs of the bunch. The "Awakened By The Stench Of Dead" EP quickly follows next. Right away you can tell that the production here while clearer is more on the teeny / hollow sound side. The band brings in the song ‘Evil Born’ for this release and while not bad sounding I think I prefer the demo version of this track. ‘The Black Blood Of Christ’ has a nice eerie acoustic start which is a nice change and brings the band’s ability to a new dimension, but then quickly jumps into a downtrodden piece that just spews malignancy without hope. It is really a shame that the band’s only full length album "Beyond, What The Eyes Can’t See…" has been out of print for so long and it took 17 years for it to be reissued in the form of an anthology but alas the band’s piece of history can now be enjoyed by newer generations. The band’s finest hour and indeed you get to see how they progressed from their demo days. For the most part the songs on here are new material and showcase the musicianship nicely providing the chunky riffs that we all remember the early/mid 90s era Death Metal bands brought. Lastly, we have the band’s first demo "Eternal Rest" and you can just feel the aggression and the hunger of a young band. While the songs are not bad, the production really takes away a lot and yes, I know this was their first demo, but you can’t help but think What If….the production was done better????? Check out this slab of nostalgia and appreciate that which was JUDECCA. For more info: www.danscrypt.es