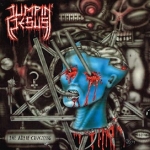 I live not that far away from Cologne and so I was quite curious when I heard something about a Death Metal band from Cologne called JUMPIN’ JESUS. I immediately had to order their demo tape tape when it came out in 1990 and it totally blew me away… That was Death Metal on a level I hadn’t heard from a German band before. I would describe it as brutal, dark, technical, complex and weird old school Death Metal. I was fuckin’ impressed by the twisted guitar work and extraordinary song structures. The band created truly original stuff which reminded me a bit of MORBID ANGEL and now and then of HELLWITCH. Mike the guitar player came from a Heavy / Power Metal band called FORCED ENTRY. Maybe it is his musical background that gave JUMPIN’ JESUS’ music that unique touch it had. The demo and one year later the debut album were outstanding releases for the early 90s. Especially for the German Death Metal scene (which, by the way, wasn’t that impressive in those days). All the demo songs (except for the intro and outro) were re-recorded for the “The Art Of Crucifying” album and that shows the top quality the band already delivered with their very first recording. Unfortunately the band split up shortly after releasing the debut and so they never got the attention they deserved. Maybe this re-release of that awesome album (including the aforementioned brilliant demo tape from 1990 as bonus) will change that. It seems that Vic Records did not modify the demo recordings. I appreciate that, because so you have the original sound, which was quite cool for a Death Metal demo from 1990. To sum it up: this is a must have, so don’t waste your time and get your copy as soon as possible. “The Art Of Crucifying” is truly a masterpiece and a German / European Death Metal classic which really deserves its re-release. www.facebook.com/jumpinjesusofficial, www.vicrecords.com