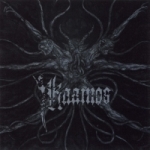 Maybe I’m wrong, but I somehow get the feeling that being or playing “old school Death Metal” is getting some kind of “trendy”. Right now there are so many bands around, that claim to be old school and in most cases are, but I think this development also attracts numerous fake ones and cheap copies. Fortunately KAAMOS are not one of the latter, but a really great, corpseshredding and gravebursting Swedish Death Metal band, that devours all this melodic, modern crap like IN FLAMES, SOILWORK for fucking lunch!!! KAAMOS should satisfy all fans of NIHILIST, GRAVE, DISMEMBER and all the other great ancient Swedish acts of the past, that today have either vanished or turned into… ahem… gay Metal, haha. The self-titled album only differs from its legendary forefathers in terms of production, because KAAMOS have an extremely powerful, crushing sound. The songs themselves are mostly fast, straight and brutal stuff, although there are some slower ones as well, like the dark ‘Doom Of Man’, that sadly begins with an awful Invocation-Intro, but turns out to be a fantastic track. My personal fave is track eight, which starts off with a cool AUTOPSY-like opening. KAAMOS are not as godly as their forefathers, but they are a really good act in my opinion and I think there are only few Death Metal fans out there, who would not enjoy this album. It is traditional and oldstyle as fuck and KAAMOS do not waste time being innovative or original, but create rousing, driving Death Metal that certainly comes from the heart. Check out their website: www.kaamos.nu or contact KAAMOS via Email: kaamos@spray.se or Mail: Kaamos, Box 605, 13626 Haninge, Sweden