KAAMOS is one of the biggest hopes of the underground Death Metal scene in Sweden. Not following any modern trend but at the same time not the typical retro-Death Metal group, KAAMOS has reached the level of a cult band. Here you have an interview with Konstantin, guitarist and spokesman of the band…


Half a year has passed since you released your long awaited first album through Candlelight Records. Have you got a good response from media and people? Are you happy with how the things are going?
"Yes, I think that we have received very good response to the album." 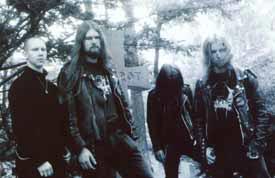 And what about touring and concerts? I think that since you played the Death Fest in Sweden you haven’t played any gig, why? What happened?
"There was some loose talk about a tour but that didn’t happen. You know, it’s hard to get a tour if you only released one CD. And yes, the Gothenburg Death Fest was the last gig we did. However, that will hopefully change to the better in a near future."

After signing for a big label some bands re-release their earlier stuff, like demos or singles. INSISION have re-released their first MCD for example. Will you re-release your demo and the promo together in some kind of special edition or something?
"No. There are no plans in releasing the earlier stuff on a CD version or something like that. We have received interest from a couple of parties in doing some form of re-release of it but we feel it is discrediting to the fans and people in the underground who have bought the demo. I personally also don’t like re-releases of demos on CD after a band has signed to a label, due to the fact that it is a cheap trick. It could be cool to have perhaps "Curse Of Aeons" on a 10" limited edition vinyl or something like that, but that’s as far as I’ll go." 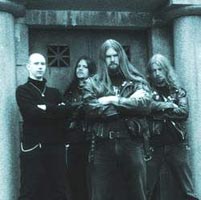 What could you tell me about the recording sessions of the album? I think it was engineered by Messiah Marcolin from CANDLEMASS in the same place where you recorded your demo
"Yes, we recorded the album in the same studio that we used for "Curse Of Aeons". Well, what is to say about the recordings… You know, generally we do not like being in a studio due to the rather sterile environment that they traditionally have. But despite our views I’d say that the session went rather good. Of course some shit happened with intervals but that was handled swiftly. And there was the surprise of getting assistance from Mr. Marcolin so that was cool. Otherwise it was a general studio session."

And what about participations? I think there were some guest appearances on the album besides Messiah Marcolin behind the mixing tables
"There was only one guest appearance and that was by a fellow that we in the band know. He’s the one doing the intro thing on ‘Doom Of Man’ since he has studied and still does, Arabic. But besides that there aren’t any. We had plans in using both old members as they have a history in KAAMOS, but we were unable to time it. Too bad, perhaps we can do it on the next recording." 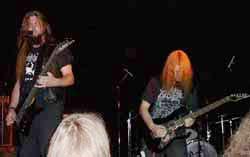 Nowadays it seems that almost all Swedish bands play melodic Thrash / Death, melodic Black / Death Metal or this new wave of American Brutal Death… What’s your opinion about that? Do you have a good response in your own country?
"I don’t care too much of what other bands play. I like Death Metal and I like Black Metal. I don’t care for raging forest Black Death Thrash Metal with Hardcore influence and keyboards, done with such a clean production that it can be viewed on TV, if you get my point. However there are some bands in Sweden that truly help heighten the standard of the Death and Black Metal genre. More bands than I usually give credit for. But in the end, I can still count them on both my hands. But that’s how I like it. Yes I’d say that we have received rather good response from our country as well as abroad. Funny is that the majority who like KAAMOS follow the tradition that I consider that we do. And that is always flattering. I mean I’d be troubled if the people who cherished KAAMOS had those bands as favourites that we personally loathe upon."

I suppose you have composed new stuff for an upcoming release. What can we expect of it? Will it be in the same vein of your first album?
"Yes we have some new material and are still composing. As always when it comes to KAAMOS I can’t really hold an objective view. But I’d say that it’s more violent, more raw, faster, darker, and more satanic. So it will definitely continue on the thread that we have created and wish to keep."

I’ve heard many things about your music, some people say you sound like VOMITORY, others that you sound like GROTESQUE or even SADISTIC INTENT… Which of these bands do you think are the biggest influence for you?
"I have heard plenty of comparisons as well. I would say GROTESQUE definitely! Of course I like both SADISTIC INTENT and VOMITORY very much as well. But as for influences I’d have to say GROTESQUE. Also almost as important as GROTESQUE we have LIERS IN WAIT, an unofficial continuation I believe of the aforementioned band, which I personally fucking worship. They were so fucking great and their MCD "Spiritual Uncontrolled Art" is one of the best releases Sweden has ever offered in the Death / Black Metal genre. If you find it fucking get it!!"

Are you optimistic with the Swedish scene? Do you think things are better than ten years ago, or do you think that they are much worse?
"Yes and no. I am optimistic in terms of that I think that a lot of raw music can and still does come from Sweden. But I am overall displeased when it comes to what is being focused on in the press concerning the scene in Sweden. I mean I can’t understand that people generally have so incredibly bad taste when I see what the Metal press generally covers. But it is the reward of politics and you scratch my back mentality when it comes to press and certain labels. But on the other side, who gives a fuck! There is alternative media for people with similar ideas, and if you know where to find it, good. If not, well it ain’t my loss. I think that the scene offered quite more genuine bands 10 years ago. Today every country can count those bands on one hand. So it isn’t really worse in terms of that there isn’t any quality. It’s just that people in greater numbers, let others decide what they like. Just like fucking sheep. So they shouldn’t complain when they are brought to the slaughter."

I suppose all of you have played in different bands before KAAMOS, in which bands have you played? Does anyone of you have a side project?
"Yes we all have a rather huge list of bands that we have played with. The most known would be REPUGNANT, REVOKATION, and A MIND CONFUSED. No there are no side projects. Well, Niklas plays with a band called SERPENT OBSCENE, but that isn’t any side project."

Finally, thanks for your time and of course thanks for releasing such an amazing stuff! Would you like to say anything else?
"Hail Death!"