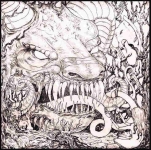 This is the third album of this German melodic Death Metal band, and the first time I have ever heard of them. The quite simple, yet effective cover art in black and white fits more a Black Metal band, but in a way it also fits the band. Although the music style is within the more melodic Death Metal vein, which reminds me of some CARCASS, AT THE GATES or even early ARCH ENEMY, the vocals are quite more evil sounding, giving a slight Black Metal touch to it. At times it has an old PESTILENCE touch to it, and sometimes in some of the more complex songs like ‘Ruins’ it does have some sound that reminds of bands like NECROPHAGIST. The sound is quite good, not too polished, not too modern, and it also shows a very competent band of musicians. There is an epic feeling in many songs, which might as well fit the lyrical aspect of the band. The album title refers that this album is actually "divided" into two parts, "Grimm I: The Armless Maiden": Tracks 1 – 5, "Grimm II: Thoughts Of The Sore": Tracks 6 – 9. Why of this, is not clear to me, maybe it has some conceptual meaning. Most of the songs are in an abstract way of telling tales of fear, life and death. At the end, it is quite interesting way of mixing a few styles into one unit, although it has a more technical approach than the one I would like, and also it seems that there are probably many mid-tempo passages, but that is a matter of taste. In an age where there is quite no originality, the band shows that they can always try something. Maybe a bit melodic for my tastes at times, but also it has a quite dark aura that can be appreciated for those looking for a more challenging band with more creativity than most out there. www.kadavrik.com, www.facebook.com/kadavrik, www.facebook.com/testimonyrecords