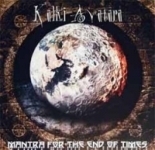 KALKI AVATARA is a one-man project act from Rome, Italy – the side project of Mr. Hell-IO-Kabbalus precisely from such unholy legions as ABORYM, MALFEITOR, HOUR OF PENANCE, etc. This 4-track EP titled "Mantra For The End Of Times", has originally been self-released 4 years ago already by the band but Canadian Shaytan Productions also re-released it in January 2009 with as a limited edition of 1000 copies. As for the musical style itself, it’s actually kinda hard to pinpoint some Metal category where this release would best belong to, as there’s actually quite a few musical styles incorporated into this EP. Avantgard-ish, symphonic Black / Death Metal is how I’d describe this stuff anyway, even if I am sure that’s not telling everything about their stuff. However, this EP is a very unorthodox – even disturbing sounding at times; there’s a fair amount of weird samples mixed into the songs, obviously to lead a listener deeper into a bizarre and twisted realm of KALKI AVATARA. The closest band comparison to KALKI AVATARA would undoubtedly be Norwegian atmospheric Black Metallers ARCTURUS but then again, KALKI AVATARA try to sound more like their completely own entity – and in all honesty even succeeding at that quite well even. In the very same breath I have to say that I am not completely sold for their stuff but at least they are trying out something a bit different musically, which is always a cool thing in my books of respect. Also, I guess it also should be mentioned that session members in the recording are Nighthorn on bass and Francesco Struglia on drums; the rest is taken care of Hell-IO-Kabbalus himself, i.e. vocals, electric and classical guitars and synths programming. More at: www.myspace.com/kalkiavatara, www.shaytanproductions.com