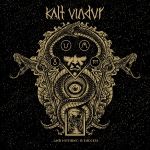 KALT VINDUR
...And Nothing Is Endless
(Witching Hour Productions)
34:50min

The band says that they play Subcarpathian Black Metal… formed in Poland in 2015, this is their second album, preceded by their debut album and nothing else, no demos, no EPs… and then those five acolytes of darkness releases this opus. I had to take a look at their previous album released in 2017 to find some background that prepares me to what I am about to experience. Their debut album showcases some of the things that the band will be soon doing, yet it can be classified as some kind of Black Metal with some Doom / Death Metal passages, a very decent performance with some minor few acoustic passages here and there and a more complex song structure than similar bands. Probably the last song of that album was the soothsayer of things to come, with a strong sense of Metal in the same way bands like DEATHSPELL OMEGA started in their “Si Monumentum…” album. And then forward to this fateful 2020 and we have this monster of an album. The Black Metal roots are there, maybe early MAYHEM and some early MARDUK comes to mind, but then there is this incredible technical work they are doing, specially the rhythm section with a fantastic bass work, and some complex drum patterns but the best thing is that they do not sound forced or that the musicians are showing off, no it all comes so natural. Then the band at times enters this melodic and doomy passages that have a certain oriental flavor. And then a few touches of what seems to be influenced by the best passages of Dutch Death / Doom, with some touches of grinding madness to make it all such a great release. The epic acoustic passages only add more to the overall sound of the band. And the tempo compared to their debut, is faster, more dynamic. The vocals also have changed a bit as the Black Metal voice is there but some more Death Metal voices are used in certain parts fitting exactly as the mood of the song is going to. The atmosphere they are able to conjure is a rare thing nowadays. And the production values are just perfect for the music. The instruments are clear, yet they have that raw sound and essence. This is that record that every time you listen to it you will find something, riffs that have a nod to old DESTRUCTION, old METALLICA, old POSSESSED yet they keep them to be in their style. This is the kind of bands we need nowadays, that proves Metal can be such a great music and that boundaries are there to be broken. Complex, technical Black Metal that adds Doom, Death and even some old Thrash elements with killer riffs and a sinister aura like few are able to conjure. For sure one of my top for this cursed 2020. www.facebook.com/kaltvindurband, www.witchinghour.pl