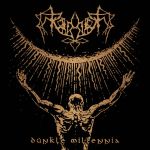 Please fasten your seat belts and welcome KANKAR from Thuringia, Germany. Of course, given the mass of new releases, it is difficult, if not impossible, to keep track of things. But for me “Dunkle Millennia” is one of the best German Black Metal albums I have heard during the last years. What impresses me is less the use of generic elements of the second wave of Black Metal (minus keyboards) but the overall impression. Starting from the band’s name, which sounds similar to the giant spider Kankra from the fantasy cosmos of J.R.R. Tolkien. But it is just not Kankra, by alternating the last two letters a new word is created that sounds mysterious as hell. Wikipedia informed me that some kind of sedimentary rock or pebble is also called Kankar (or Kunkur) and the term derives from the Hindi language in India. Which is no less mysterious. The imagery of the cover is simple, yet effective and arouses, at least to me, different emotions. The album starts slow, clean singing with melodic acoustic guitars and at the first moment one may think of some kind of Folk or Pagan Metal. But do not be fooled, already with the second song ‘Krater In Sarx’ the duo Strid (guitars, bass, vocals) and Plagan (drums) makes clear where the sonic journey leads. Deep into the dark, despondent areas of your inner-self, back to the battle-fields of long forgotten times and ancient legends. Eleven songs in three quarters of an hour (no intro, outro or interludes) show that KANKAR are keeping things rather short. Maybe that is the reason why I like this album so much, no ten minute (or even longer) songs but short and firm, concentrating only on what is necessary to write excellent Black Metal. Brevity is the source of wit, so to say. Therefore, take some minutes time and listen to this outstanding Black Metal album. You can find band and label here www.facebook.com/kankarofficial and here www.facebook.com/eisenwaldofficial