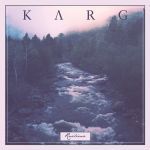 The second track of this two song EP is entitled ‘Lorazepam’ and that set my alarm bells ringing. May sound like a Sumerian demon to some, but in fact it is a substance from a group of medicines called benzodiazepines. Such drug substances are used to relieve anxiety symptoms and have a sedative effect. Don’t worry, this is not going to be a package leaflet or a lesson in pharmacy. But as I am working as a nurse for more than twenty years the fact a Black Metal band using such a medical term is quite fascinating for me. Whilst we are at it, the title means resilience and the name of the second song ‘Abbitte’ can be translated with the words atonement or apology. So the lyrics are more about your inner demons respectively the battle of your inner self with that monsters in your head. Despite, or maybe just because of it, KARG is a one man band there is a continuous flow of releases. Seven full-lengths, three EPs, two split-releases plus a demo and a vinyl single is very much for a time range of 15 years. As if it was the most natural thing in the world V. Wahntraum (who is also part of HARAKIRI FOR THE SKY under the monicker J.J.), the man behind KARG, is combining Black Metal with elements of Hard Rock, Progressive Metal and somehow he even smuggled parts of so-called Shoegaze (which later evolved to Brit / Indie-Rock) in the more than half-hour music. Some people call this style “Blackgaze”, but for me the term Post Black Metal is more fitting. Simply because the base still is what was forged in the early 1990s in Scandinavia. Clear singing for example is completely missing, the keyboards are not dominant and just flickering in the background. The two pillars of KARG are the excellent guitar work with its superb melodies and the versatile Black Metal vocals, covering from shouting to grunting every facet. Those two basic elements are able to evoke a wide variety of emotions without sounding too pathetic. As the lyrics are written in Austrian dialect it is even for a native speaker of German like me difficult to understand. But there is no need to understand every word, since the atmosphere is such dense and compact. You can simply feel the transmitted emotions. KARG are for sure one of the leading Post Black Metal bands and with present EP this status is underpinned once more. All further band information can be found at www.facebook.com/kargband, label contact at www.facebook.com/aoprecs