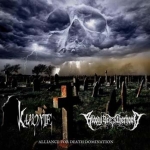 “Alliance For Death Domination” is a short split between KARONTE and BLOODY BROTHERHOOD that provides a duel-edged assault of Spanish Death Metal. KARONTE have been active since 1994, with a trio of demos, two albums, an EP, and a box set since inception. BLOODY BROTHERHOOD formed in 2011, producing a demo and a full-length in the six years they have been active. Both bands play straightforward styles of Death Metal; phrasal, aggressive, and well arranged. KARONTE open the split, contributing three songs. Opening with ‘El Ocaso’, KARONTE immediately bring the violence right out of the gate. After a brief period of feedback, a Thrash – like downbeat accompanied by a grating palm-muted riff lay a foundation for guitarist / vocalist Kini to spew vocals over. The song arrangement is stripped-down, utilizing a conventional verse / chorus structure, and alternating between the faster opening phrase and a more refrained, chord-based chorus. What makes ‘El Ocaso’ and the subsequent KARONTE material on the split memorable is the tasteful use of melodicism. The bridge in the first track is great example; a masterful lead with an NWOBHM edge that progresses into harmonization before slamming shut and moving back into the opening phrase to resolve the song. ‘No Hay Vida Sin Dolar’ and ‘Dominacion’ follow in similar fashion. ‘No Hay Vida Sin Dolar’ rages at the start with a galloping melodic riff that progresses through several tonal variations before moving into a midtempo groove segment. Another thoughtful lead section drives the bridge of ‘No Hay Vida Sin Dolar’ towards the end of the track, and ‘Dominacion’ follows a similar arrangement and execution. BLOODY BROTHERHOOD close out the split with two tracks. BLOODY BROTHERHOOD employ less melodicism when compared to KARONTE, but the trade-off being a faster, more compositionally diverse style or take on modern Death Metal serves to complement one another well. BLOODY BROTHERHOOD open their side with ‘In Tyrant’s Land’, which starts with a grinding palm-muted open note riff that is peppered with tight intervals of hammer-ons and pull-offs. Several changes of tempo take place throughout the song, made more powerful by the somewhat chaotic transition between them. ‘Thousand Years Of Lies’ employs a more Thrash style approach that is tinged with melodic Death Metal. An appearance of synth swells comes early into the song, nothing overpowering or out of place; simply a complimentary atmospheric element. Production is fitting for both band’s deliveries. KARONTE have a more powerful low-end presence while BLOODY BROTHERHOOD is more centralized with a firm mid-range dynamic that fit their interpretation of Death Metal well. Both bands on “Alliance For Death Domination” do work well, sonically, together. The problem with a lot of splits is one band usually blows the other band’s (or bands’) output out of the water, which, in some perspectives, detracts from the value and purpose of the split. However, from production to execution, KARONTE and BLOODY BROTHERHOOD do match together very well. KARONTE’s style of Death Metal on “Alliance For Death Domination” will appeal to fans of modern KATAKLYSM, and in some aspects SIX FEET UNDER or TORTURE KILLER. BLOODY BROTHERHOOD would work great for fans of thrashing Death Metal or for fans who want something that exceeds the lame-duck delivery of many post-2010 melodic Death Metal bands. Dead Sheep Productions is responsible for the release of “Alliance For Death Domination” and can be reached at www.deadsheepproductions.es. The split is available in digital and CD format, as well as a limited number 10”. The bands can be found at www.karonte.info and www.facebook.com/bloodybrotherhood, respectively.