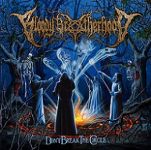 Four years after their self-financed debut "Ritual Of Blood" Basque based Death Metal outfit BLOODY BROTHERHOOD is back with a new full-length. Since the band was unknown to me I did not know what to expect, the album title reminded me of the BLIND GUARDIAN song of the same name and judging from the cover it could have been anything, even the short intro did leave you in vagueness. But a few moments later the drums are increasing the pace and everything is clearing up. Death Metal the British way. Milling mid-tempo combined with blast beats outburst and deep grunted, yet pronounced vocals. Plain and simple played, you will not find any superfluous shenanigans. Names like BENEDICTION and BOLT THROWER are immediately popping up in my mind. And of course "Harmony Corruption" by NAPALM DEATH. As everyone knows BOLT THROWER retired and BENEDICTION are more or less inactive respectively the status remains unclear. They released two albums in this decade ("Organised Chaos" in 2001 and "Killing Music" in 2008) but recorded a new track (‘Tear Off These Fucking Wings’) featured on the reissue of the "Death Is Just The Beginning" – compilation released by Nuclear Blast (the label was known for… but hey, that is another story) in 2018. But instead of being satisfied with one demo track fans of British Death Metal should instead give BLOODY BROTHERHOOD a try. But what is with MEMORIAM, the band formed by veterans of BOLT THROWER and BENEDICTION? Well personally I never liked them, because they sound pretty uninspired and stale and furthermore I think the world can easily tolerate more than one band playing that special blend of British Death Metal. What surprised me was the playing time. One hour is quite long, but when I listened to this album I simply did not notice any signs of boredom or repetition. Only straightforward and brutal Death Metal. For more information visit www.facebook.com/bloodybrotherhood, www.deadsheepproductions.es