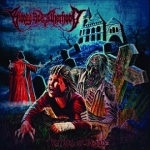 Are you ready for an overdose of good old fucking Death Metal? Yes, then this infernal assault might pulverize your cranium. Rising from the darkest abyss of the Basque country BLOODY BROTHERHOOD takes you back in time where our beloved style of Metal reigned supreme. "Ritual Of Blood" is the trio’s debut album (a demo was released previously in 2013) and it offers eight quite well executed bloody and rotten chunks. The album kicks off with the title track and it impressively makes clear that this horde won’t take any prioners at all. It’s heavy, it’s evil, it’s blasphemous and it will shave your head… it’s like a swing of the axe. The outfit comes up with traditional riffing and pace spiced with some excellent harmonies. But what makes it even more intense is the use of some insane blasts when the band shifts into full gear. Sounds absolutely brutal and bestial like Hell! Just have a listen to ‘Inquisition’ and be blown away by the power they are able to generate. The Basques never slow down the intensity and aggression on the entire album. And to pay tribute to one of the greatest Death Metal bands of all time one of the eight tracks featured on this longplayer is a well done cover (‘Infernal Death’) of Chuck Schuldiner’s legendary horde. The production of the disk is not yet perfect but it serves the band’s material quite well. Despite its raw intention it delivers a powerful and clear sound. Actually I haven’t more to say here except of recommending this morbid piece of brutality and darkness to all Death lunatics out there. Just visit the band’s site at www.facebook.com/bloodybrotherhood and check out tunes like ‘Blood Brotherhood’, ‘Slow Death’ or the afore mentioned songs. Horns Up!