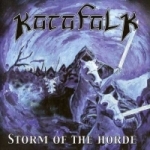 Holland has been spitting out countless of talented brutal bands throughout the years and KATAFALK from Groningen is certainly no exception to the rule. These five possessed maniacs have managed to mix good old Thrash insanity (SLAYER / KREATOR) with the aggression of brutal Death Metal and are blasting through their debut full length “Storm Of The Horde” without compromise! Only three out of the thirteen tunes on offer here turned out longer than three minutes – the rest is even more stripped to the bone and consequently hits you right into your face! All in all very cool and despite the usual factor of unoriginality (that 90% of extreme bands these days have to deal with), quite promising! Even though the nucleus of KATAFALK has already been around since 1995 (with guitarist Christian being the only remaining member), for many of you they probably came out of nowhere. But all line-up changes they had to go through up till now and their big number of live shows always resulted in a more intense musical direction afterwards. In 1997 and 2001 they recorded two demos (“Through The Storm” and “Promo 2001” respectively), of which the latter finally resulted in a deal with Cold Blood Industries. Strong and tight musicianship, an aggressive vocal delivery and a raw, yet good production sums up the record pretty quickly and at the same time also reveals its weak points. The longer I listen to it, the more it tends to bore me for the simple fact that it still lacks a bit in diversity. I mean, some slower tracks in between would probably already have helped. Not only to keep my enthusiasm alive from start to finish, but also to increase the factor of catchiness (not meant in a polished, commercial manner of course). But everything’s just fast and if it wasn’t for the great SLAYER-esque old school riffing I would probably have switched off the record a lot earlier already. But hey, this is only the beginning, there’s already a lot of potential involved and therefore I bet that KATAFALK will manage to come up with an even cooler follow up. So, you better keep an eye on them! Contact: www.katafalk.com, Label contact: www.coldbloodindustries.com