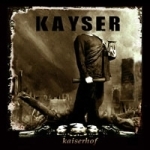 Sweden’s KAYSER got together in June of 2004, never really made themselves a name in the underground through demo releases or anything and about a year after their origin they are already delivering their debut full length “Kaiserhof” via Italy’s Scarlet Records… So, as you can probably imagine, I wasn’t necessarily too excited to check these guys out in the first place. And the fact that I didn’t really like their monicker nor any of the member’s former bands didn’t help to increase my enthusiasm either… So, what kind of band are we actually dealing with here then? KAYSER’s line-up consists of former SPIRITUAL BEGGARS vocalist / bass player Spice, the two guitar players Mattias Svensson (THE DEFACED) and Fredrik Finnander (ex – AEON) as well as Bob Ruben on drums (ex – THE MUSHROOM RIVER BAND). Their album was recorded at Caesar Studios (SOILWORK, THE DEFACED etc.) and features 10 tracks… and those tracks surprisingly blew me away completely after I had listened to the disc for the very first time! If you think that THE HAUNTED or DEW-SCENTED come up with SLAYER-esque material, then I really wonder what KAYSER is supposed to sound like in your opinion? These guys worship the classic Hanneman / King riffing to the max and even the drumming often reminds on Lombardo’s incredible varied playing style. Some traditional melody lines as well as Spice’s cool, angry vocals (that are neither modern nor of the typical Hardcore type) complete the impressive ten tracker of a band that I would never ever have checked out, if I hadn’t received a free promo copy of it. So, thanx to Scarlet for introducing KAYSER to an old ignorant Metalhead! Great one! www.scarletrecords.it