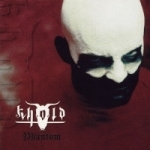 Despite the rather stupid album title “Masterpiss Of Pain” I really liked last years debut album by Norwegian KHOLD quite a lot. The band managed to capture the essential harsh and cold atmosphere of traditional raw Black Metal in a quite impressive manner, but mostly performed everything in a very midpaced to slow speed. Unlike many other bands of this category they were even blessed with a good, yet raw and unpolished sounding production and vocals in the good old DARKTHRONE / IMMORTAL vein. Why I tell you all this? Well, for the simple reason that their follow up album “Phantom” exactly fits into the same category again. If you liked “Masterpiss…” you can also pick this up without having to experience a disappointment in any way afterwards. The only thing which I personally would like to see changed in the future is the speed of the songs. It would definitely enrich the variety of the record if there would be a couple of really fast and aggressive tunes included. Apart from that, another good one from Gard and company.