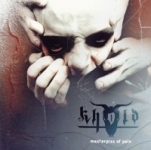 I wasn’t really sure what to expect from an album with a stupid title like “Masterpiss Of Pain”, but after I had finished listening to it for the first time, I immediately pushed the play button once again. This is really fuckin’ great stuff! Very raw and very old school, yet totally Norwegian sounding Black Metal with a touch of DARKTHRONE, but a lot better produced. Even though KHOLD is still a new name to the scene, the four members have all previously been active in other bands before already (TULUS, OLD MAN’S CHILD, VALHALL etc.) and you’ll recognize those past experiences pretty easily as they know how to write exciting songs. Instead of blasting through their material, they mainly concentrate on slower / midtempo compositions that live off interesting riffing and a Nocturno Culto like vocal delivery. My personal favorite out of the ten featured songs is ‘Den Store Allianse’, which combines all the band’s trademarks in the best possible way (just listen to the killer main riff!). Unfortunately KHOLD are losing breath towards the end of the disc a little bit, so that you’ll also get two or three kinda average tunes. Nevertheless, this still remains an excellent release, which may not have any mainstream potential, but a lot of the old spirit instead. Highly recommended!