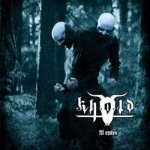 The Norwegian Black Metal outfit with a new album… to be honest I cannot recall that much of this band although I am sure I have heard at least one album from them. And this new one, I am afraid, does not change the fact that it’s not really memorable. Basically we are dealing with a mostly mid-tempo very well played, executed and recorded brand of Black Metal, which is direct and simple. They do have a quite obvious Rock aura overall, like the one you can feel with BATHORY or VENOM on their debut albums. There is a certain icy sounding atmosphere, where the band reminds me of the more obscure parts of early CELTIC FROST. They do shout and growl in their native language, thus adding a bit of nostalgia while listening to Black Metal, as it was mid 90s again. Yet, no matter that they do sound heavy and pounding I find few interesting riffs to keep my attention after listening a few times to them. Also, the abuse of mid-tempo makes them sound quite similar in many parts, as some faster parts here and there proven to be more attractive and give the band a more aggressive sound. An interesting fact is that they used an old SEPULTURA song to cover (‘Troops Of Doom’ although translated into Norwegian) as they do a quite good job on it. Still, when the cover version song turns out to be the best number on the album, it makes you think that something is missing. Not a bad album anyway, and if you are a fan, this will not change, but alas, if you were not a fan or were in doubt, I am afraid this will remain the same. For all further info check out: www.khold.net, www.facebook.com/pages/khold/1501924543375790, www.peaceville.com