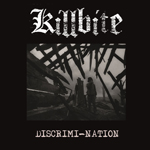 Alert readers of these pages will already have read the name KILLBITE here before. Up to now, this fairly new band from Bremen has two demo recordings and a 10” EP out. But now it is due time for a first full length album. This blast was baptised “Discrimi-Nation” and financed and released in best DIY style all by the band itself. With this album, KILLBITE took another huge step forward! In comparison to earlier releases, the stress is put a little more on Metal, Death Metal in particular. Names like TRAGEDY or HELLSHOCK come to mind immediately, not only as a musical cornerstones, but also as far as intensity and impact are concerned. A dramatic piano intro piece paves the way for the title tune, a super intense mid tempo groover that punches the stomach with full force. You can literally feel the anger of singer Alex, vexed at xenophobia and society’s prejudices. The double pack of the pissed off tune ‘Won’t Break Me’, another new track, and ‘Death Illusions’, the title track of the 2014 demo, takes no prisoners as well, especially the latter with its rude groove. But despite the enormous groove overkill, KILLBITE haven’t forgotten their roots, that is the slightly metalized Crust Punk in the vein of WOLFBRIGADE, DISFEAR or SKITSYTEM. Take ‘Guilty As Charged’ as a perfect example for this. Another well known song from the last demo tape closes side one of the album: ‘Joystick Generation’, another mostly up speed song with an injected slammin’ groove. As you might have presumed, KILLBITE haven’t shot their bolts on the first half of the album. No fuckin’ way, Sir! ‘Nobody’s Slave’, a manifesto of freedom, is the best proof. This one has already an irresistible guitar introduction and grooves like hell! And, by the way, it’s another tiny example that drummer Ballo learned his Metal lessons, playing some double bass drums. A kind of center piece of the album are the next two songs, both sung in German. The demo song ‘Lampedusa’ is an angry shout with a sad lyrical topic, since it deals with the fate of refugees and their often daring escapes. The following ‘Wutbürger’ is also from the “Death Illusions” demo. Yet, this song is more important than ever, due to the alarming latest poll results in Germany. With the newly inserted samples, it points the finger at the new political far-right in Germany. Well, to tell the truth: it’s the middle finger that’s lifted against these racist and xenophobic tendencies. Thus it’s no wonder that ‘Wutbürger’ is nothing less than pissed off! The album won’t be complete with the band classic ‘Cloud Nine’, a song in the tradition of SKITSYSTEM, that sounds better than ever, and the fantastic ‘Heaven For Demons’. This one is another fast and rude track, yet it has an even doomy break with choppy guitars. To close the album, KILLBITE remember a kind of tradition of old Crust and Stenchcore. The untitled outro is a stately instrumental piece with message, packaged in samples. After that, it’s time to hit repeat or better to turn round the vinyl and start again from the beginning. “Discrimi-Nation” leaves me with no other choice, since it is one of the finest albums that was ever released in the twilight zone of Death Metal and Crust, musically. And the message that this bands transports is either on my side. If you want to get an ultimate kick in the ass, visit KILLBITE at www.facebook.com/killbite, www.killbite.de or killbite.bandcamp.com. You wiil for sure want to get the album, either as a fine and worthy vinyl record or as a digipak CD. In this case, mail to: break-the-silence@freenet.de. And for our readers from South America, check the site of Red Star Recordings to get the album: www.redstar77.com.