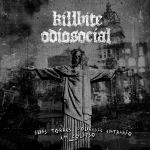 Bremen’s own Crust masters KILLBITE became regulars on these pages in their now five years of existence. The last twelve months saw the band busy again, which is documented with a new release. This time it’s a split vinyl album they share with their Brazilian brothers in crime ÓDIO SOCIAL. Both bands toured Brazil together last year and became very close, thus it is no wonder that this release is named in Portuguese. “Suas Torres Douradas Entraráo Em Colapso” shows KILLBITE a little bit more back to their basic Crust style in comparison to last year’s full length “Discrimi-Nation”, even though they, of course, haven’t changed their style. It is just that this time the slight Death Metal influences are not as present on their songs. But naturally this doesn’t effect the assault force of the band. The opening ‘In A Kids View’ already is a killing mid tempo dance floor cleaner that will surely please anyone into Crust Punk, especially when the D-beat sets in. With ‘Am Ende Des Tunnels’ KILLBITE once more show their ability to use breaks and speed changes in their best way, and this one has a cool and fitting guitar solo as well. A real highlight of this release is ‘Break Down All Borders’, not only because of its message, but also musically, since the grooving breaks of this up-speed song are really forcing. Oh, and the guitars kill again! When I saw KILLBITE recently, ‘World On Fire’ was one of the absolute killers of the set: straight into the face with intelligent grooves and full of sheer energy. Thus it’s no big surprise that the studio version here kicks serious asses. ‘Paradox’ is my personal favorite of KILLBITE here, since the intro already kills and the somehow Postcore influenced guitars intensify this song in addition. Well, this would be a great end, but KILLBITE decided to pay tribute to one of their influences on this album. And ‘Pobreza’ by RATOS DE PORÃO is definitely not the worst choice to do so. This one originally appeared on the classic “Crucificados Pelo Sistema” and since it is sung in Portuguese, Pedro Drunk from AGROTOXICO helped out on this one. So, the KILLBITE songs alone are worth getting “Suas Torres Douradas Entraráo Em Colapso”. But there’s another great band as well: ÓDIO SOCIAL from São Paulo. These three guys are around since the year 2000 and can be seen in the very fine Brazilian tradition of extreme Hardcore and Crust Punk from especially this town with bands like RATOS DE PORÃO, OLHO SECO or AGROTOXICO. And this is not just name dropping supreme here, but a serious hint on how good ÓDIO SOCIAL are. From the first seconds of the opening ‘Arautos Do Terror’, this trio takes no fuckin’ prisoners. ‘Soldado Sem Alma’ and ‘Igual A Mim’ sound so much like São Paulo, it’s a pure joy. The latter one includes fine bass breaks and a guitar solo as well. My personal fave ‘Diaspora’ is a rude kick in the face, yet this one also has great breaks. ‘Celulas Em Decomposicao’ and ‘Era Verde’ take the same line and close a rather short, yet impressive attack of finest Brazilian Hardcore. After this split album, I’m really looking forward to see ÓDIO SOCIAL on their European tour this fall. So “Suas Torres Douradas Entraráo Em Colapso” is a chance for all of you to get two great bands and pay for only one record. Visit KILLBITE at www.facebook.com/killbite, www.killbite.de or killbite.bandcamp.com. More information about ÓDIO SOCIAL you will find at www.facebook.com/odiosocialpunkrock. Label contacts: www.breakthesilencerecords.com (if you’re European) or www.redstar77.com (if you’re from South America).