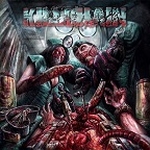 KILLCHAIN
Where Is Your Saviour
(Metal Age Productions)
29:10min

A band name like KILLCHAIN sparks some hopes, thanks to a BOLT THROWER song of that name. But the four piece that chose to call themselves KILLCHAIN has not much in common with the English Death Metal gods. Hailing from Kosice in the Slovak Republic, the quartet went on their way to show the world their way of Death Metal in 2005. And this way is paved with a good dose of Grindcore influences on their third album “Where Is Your Saviour”. KILLCHAIN ravage through the 10 songs (plus an intro) in less than half an hour, most of the time in near supersonic speed. There is one band that comes to mind every twenty seconds: MISERY INDEX, including the typical trademarks in sound and style. Add a few strange elements in the guitar playing like in the opener ‘I’m Rotting From Inside Out’ or ‘Judge Enforce Silence’ that even hint at THE DILLINGER ESCAPE PLAN, and you’ll have the essence of how KILLCHAIN sound. Yes, they would love to be on Relapse Records for sure, but they ain’t. Maybe if they move on to a more original style of their own. “Where Is Your Saviour” is definitely not a bad record, it just sounds a bit too much of a band that already exists. If you’re into this modern sounding Grind stuff, check www.facebook.com/pages/killchain/44027331800 or www.metalage.sk