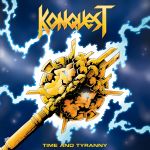 “Time And Tyranny” is the new album of the Italian NWOBHM band KONQUEST. It is the second album, following their debut “The Night Goes On” (2021). Group leader Alex Rossi again delivered everything on his own and is surely on a quest to establish KONQUEST something of a band that honors his old Heavy Metal roots. The Italian musician had already provided some delightful writing samples on their debut, so “Time And Tyranny” shows more compositional progress that has occurred in the interval since their debut. And if their debut album seemed like some lost work of some obscure Heavy Metallers, this sophomore effort seems broader in terms of influences and creative horizons. The style followed by the Italian musician in this effort praises the achievements of HEAVY LOAD, the ancient IRON MAIDEN, MANILLA ROAD and THIN LIZZY, among other forms of the same group. The disc kicks off with the intro ‘Relativity’ and as the lead guitars soar above, Alex Rossi’s fondness for the guitar runs of IRON MAIDEN is immediately apparent. And from there, for the most part, “Time And Tyranny” turns out to be a gripping album that can entice listeners to play air guitar and fist pumps in the air. Be it the Metal anthem ‘Something In The Dark’ with a drum intro, stellar guitar works in ‘A Place I Call Home’, be it the ballad like ‘The Light That Fades Away’ or the eight-minute epic ‘Warrior From A Future World’, all the compositions again have an effortless catchiness with the air of the early ’80s everywhere. The production is warm and organic with a live feeling. Since most albums these days suffer from a compressed thin sound that makes songs sound feeble, “Time And Tyranny” can win hearts here. Bart Gabriel mastered the album and shaped a Heavy Metal sound, absolutely suitable for the songs, and invokes the climate of that time. This obviously gives most of the songs an anthemic aura that will surely benefit them in live settings. With 37 minutes of playing time the album may be a bit short, however, it will remind anyone that even in modern era, well-made traditional Heavy Metal can always run emotions higher and fantasy deeper. “Time And Tyranny” is now released worldwide on CD and LP formats via No Remorse Records and deserve heavy attention. To know more about the band and label, visit www.instagram.com/_konquest_, www.facebook.com/noremorserecordsgreece