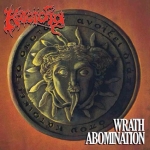 Last year I reviewed these guys second EP, which was released on tape by the Greek label Repulsive Echo. Three killer songs that helped put KOROIDIA on the Death Metal map in my opinion. The first release of the band was this 5 track CD, released by Ceremonial Records. Both band and label hailing from Florida and when you press play on the CD, you are not in doubt of this release being from Florida, as it has the classical Floridian Death Metal trademarks. When the five tracks are done pounding you with a sledgehammer, it feels like you’ve been through the last 30 years that made us love Death Metal from Florida. KOROIDIA are putting their own twist on things. A mixing pot of all things great within the Death Metal genre, delivered with passion and conviction, really intense and straight into our livingrooms. The songwriting is great and clever. Quite catchy and still brutal and heavy as fuck. Midpaced and menacing, always pushing forward with great breaks and hooks, great guitar riffing, intense rhythm patterns and I really like how the bass is shining through and how it is being slapped. It is about time for KOROIDIA to be picked up by one of the bigger labels, as they more than anyone else, right now, are the saviours of the Death Metal we learned to love and headbang to back in the beginning of the 90s, the Death Metal that carved the path for many bands up during the 90s and mid-00s. We need some of that passion and hellish brutality back, and this band is just right for that! Beware of the cries of the forsaken while entering here: www.facebook.com/koroidia, www.facebook.com/ceremonialrecords