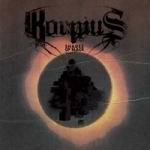 Sherbrookian extreme Metallers KORPIUS’ debut album, "Shades Of Black", is a good listen. Do I need to say more? Hah, I guess I do, albeit I’d rather enjoy listening to this than getting my lazy thoughts on the paper about it. By using a tiny shortcut, the right words to describe KORPIUS’ outcome music-wise here, would be progressive, modern sounding blackened Death Metal. I guess they would fall into that category more than well, but then again, it’s really up to every listener how they want to judge their music once they have actually given a listen to this record. The first impression that KORPIUS manages to give on the listeners on "Shades Of Black", is that the guys have undoubtedly taken their time – and put just lots of effort into the songs on this well-crafted debut studio album of theirs. KORPIUS’s extreme Death / Thrash / Black Metal flows in nicely, in which bridges in between some more progressive parts – and more straightforward sounding, certain types of Metal-genres related elements have been carefully built, to make all these ingredients to connect to each other as seamlessly as possibly. The interaction between nasty Black Metal shrieks and grunty Death Metal growls works as regular as clockwork here. Both vocalists Maxime and Philippe have obviously hit their smart skulls against each other to figure out how to make their vocal parts to match and support each other the most ideal way. The band’s extreme Metal has thoroughly well done; the guys’ understanding of how things need to be done in order keep their stuff interesting yet appealing to people, has securely been received inside the KORPIUS-team. However, having said all that, they haven’t invented the wheel again on their otherwise, in many ways pleasing debut record either. There surely are quite a few bands out there these days already that have achieved similar level of skillfulness to KORPIUS’ approach on this record, so I think a fair warning is in order here: if you expect KORPIUS would bring something new – or even mould-cracking to the genre, then just please stop dreaming right there. Even if they may lack some in originality and ground-shattering innovation quite a bit, they do make it up for their professional playing skills and clever songwriting capacity they have. Hence the band’s debut studio album, "Shades Of Black", may well be worth your attention if just well thought out progressive and blackened Death Metal is a part of your personal musical likings at all. www.korpius.com, www.myspace.com/maplemetal