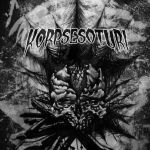 KORPSESOTURI is a three-piece Death Metal act from Finland and this, a four track EP titled homonym, was self-released by the band (a limited tape version of 50 copies – 25 dark grey and 25 brick red – was released by Caco-Daemon Records). Short songs, simple composition, and lyrics in their mother tongue are what this Finnish trio offers. The sound reminds me a bit of AUTOPSY and some Swedish Death Metal influences like GRAVE, ENTOMBED, etc. ‘Lumituhka’, the first track, works as a short intro and the first approach to this production. ‘Pohjoinen Perkele’, the second track, is a generic Death Metal composition charged with some blast beats and fast guitars. The best track here is ‘Veriviini’, a 3 minutes song (the longest here). The introduction of several tempo changes and a better development on drums and guitars than the first two tracks work in a good way. This record closes with ‘Yöhön Mustaan’, another good track with more development on the rhythm section. I’m not impressed with this stuff since there’s a lot of bands that sound very similar, but I believe this is a good first effort. More information here: www.facebook.com/korpsesoturi, https://korpsesoturi.bandcamp.com, the tape is available through www.facebook.com/cacodaemonrecords