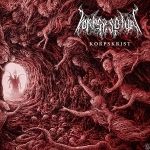 Country of origin checks out. Genre checks out. With vocals oscillating between the netherworld and reality KORPSESOTURI is your quintessential Finnish Death Metal band that literally checks all the boxes of a modern Death Metal signature that is now the standard. The drums are higher in the mix and they get in the way now and then otherwise they’re the default battering ram on your senses. The chainsaw guitars simply move from section to section annihilating objects in its way. KORPSESOTURI‘s second full length offers a decent glimpse into the evolving sound of Death Metal at large in 2021 which thankfully isn’t a cloud of consciousness moving from one target to another. However, the band surely seems to be streamlining their overall sound by this release. “Korpskrist” on the whole is a fair effort by the band, whilst it doesn’t offer something new it upholds the current tradition of the genre. The songs stick to the blueprint and I can’t pinpoint a certain track or section to be the definite standout, the quality of output doesn’t dip throughout the album. I just wish the guitars were mixed slightly higher though, often the vocals and drums take the lead and thankfully they’re fine. The band slows down the pace in the second half of the album and that immediately makes an impression, ‘Kadotuksen Kiihkeä Voima’ being a primary example. The band adds in good melody to their brutality resulting in quite an enjoyable experience. This is where you’d know what the band is capable of. A slower rhythm to accommodate the heaviness isn’t new but the band manage to sound close to a slowed down BOLT THROWER at places and once they establish a platform they pick up the tempo. This is quite well done honestly. Check them out, I’m sure it will appeal to a lot of fans. For more information, please visit www.facebook.com/korpsesoturi, www.xtreemmusic.com