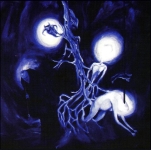 "You don’t have to feel sorry for me, I wanted you to rape me as well!" could have been a fitting intro to this record, instead we’ll get it a good deal into the album when we hit ‘The Master’s Voice’, though "I was 27 years old the first time I died…" is fitting as well, as the beginning to this nightmarish record from KRIEG, which now has been re-released in a remastered edition on Forever Plagued Records. Though this is the last release from the band I really got into, a stunning record that offers all that KRIEG is about. We have the evil and cold misanthropic atmosphere drenched thickly over the tracks, together with a good mix of chaotic Black Metal, ripping Thrash and straight forward darkness. A diverse album that sums up all what N. Imperial, so far, back then had been creating with the band, a fist in the face of the weak. The DARKTHRONE homage in ‘Who Shall Stand Against Me?’ is grand, the overall atmosphere on the album, the catchy yet dark songwriting, the great guitars, the vocal attacks, the misanthropic feel of pure evil, it all adds up to a great and lasting album, which is at least as good nowadays, as when it was released for the first time back in 2006, if not better and more hard hitting compared to the rest of the scene today. My favorite release by the band is still "Kill Yourself Or Someone You Love", nothing compares to the atmosphere on that live release, though this one is up there, together with some of the earlier tracks from different releases. www.facebook.com/officialkrieg, http://kriegofficial.bandcamp.com, www.foreverplaguedrecords.com 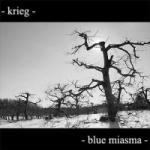 KRIEG’s final album is a hard one to review. On one hand this is probably KRIEG’s most “musical” effort, and I must honestly say that this is certainly the album that I had the least problems with to give it full spins, on the other hand I am not sure whether the fact that it is KRIEG’s most “musical” and less harsh and noisy release is reason enough to give it praise. Unfortunately the album is very long or, too long in my opinion and does not sound very congruent. Although I have no information about the line-up, when it was recorded etc. I am pretty sure that it had not been recorded in one session. The sound as well as the songs vary too much. And while it never looks as if there was not just one band performing, the influences that range from Death and Thrash Metal to – of course – Black Metal, partly even within a song, and make it hard to listen to. Adding to this, some songs simply are only mediocre. In fact, if KRIEG had concentrated more on the slower and more depressive songs like ‘Under An Uncaring Moon’ or ‘Every Wound Burned’, and had kept it overall more compact like e.g. just 40 minutes, concentrating on the latter half of “Blue Miasma”, I would not refuse a second to give this album praise. This way I am left with mixed feelings, this album has some standout songs, and I appreciate it that it in fact has actual songs, but then there are songs where I cannot even remember what I listened to for the last couple of minutes, featureless and boring. In any case, no album one should buy blindly, as it is even a bit different to previous KRIEG outputs. A two-sided edge indeed.