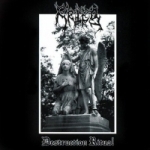 “Anti-social Black Metal without the need of gimmicks or nude sluts on the album covers. Fuck off to today’s so called Black Metal and its trends! KRIEG supports the war against you!” Need I say more? This quote from the band’s info sheet should already give you an idea of what to expect when it comes to this one man project from the US. KRIEG is basically the brainchild of a guy named Imperial, who’s responsible for guitars and vocals on this album. The drums got played by a session member (Duane Timlin) while a bass wasn’t even used, probably in order to get an even more Black Metal-ish sounding result. The overall material is not necessarily bad as it definitely delivers the right feeling, it’s just that (apart from a really cool sounding, hateful voice) “Destruction Ritual” suffers quite a bit from the almost non existing playing / writing abilities. I mean, all power to bands that still stick to the old school Black Metal direction, but even acts like DARKTHRONE, TAAKE, CARPATHIAN FOREST, ISVIND etc. already delivered better quality products, with a more matured songwriting and never ever sounded trendy, fake or whatever. So, instead of flooding the market with more CD’s of this minimum of quality, I would appreciate a decision to go for rehearsal – or demo tapes first. That would be a lot more honest, and also cheaper for the real underground maniacs. www.redstream.org