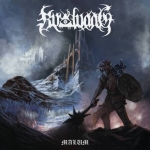 The second album by Norwegian based KVALVAAG, or to be precise the second official release. An album titled "Fomalhaut" was recorded, but is still waiting to be released. For what reason I do not know, as well as I still have not figured out whether this is a real band or a project of the one who calls him- or herself Kvalvaag. But let’s focus on the music, which has definitely its magical spell. The six tracks (plus one cover version) are pure dedication to the second wave of Black Metal in the early 1990s. Lo-Fi sound with clanking guitars and those very special keyboard tones. Some may label the keyboards cheap and low-budget, but for me it’s more an affair of simple, but effective. Like the whole album is very reduced. Just take a listen to the cover track ‘Naar Solen Blekner Bort’, taken from the famous “Drep De Kristne” album by TROLL, which stands as representative for the whole idea behind KVALVAAG. The album is a blue-print for an entire era of Black Metal and "Malum" is not trying to redefine or to widen this genre. If it is proper to label music played some 25 years as old school KVALAVAAG delivered some fine old school Black Metal. If you are still listening to early works of DIMMU BORGIR, ANCIENT or the above mentioned TROLL and if you are (like me) of the opinion the EMPEROR / ENLAVED split album from 1993 is one of the greatest Black Metal releases ever, then do not hesitate and check out KVALVAAG. www.facebook.com/kvalvaagband, www.dusktone.eu